As a hand surgeon, Dr. Thomas finds beauty in hands. From the structure of bones and ligaments to way hands move.  We promised that his two signatures; his bow ties and his artwork would not be lost as we updated this website. Below you will find some of Dr. Thomas’ favorite works of art.

The hand and head of Pierre de Wiessant from Rodin’s Burghers of Calais. Pierre de Wiessant was the fourth Burgher to volunteer after his older brother Jacques de Wiessant. Pierre is depicted turning sideways toward Jean de Fiennes with one arm raised and his mouth open “in a slow procession towards death.” 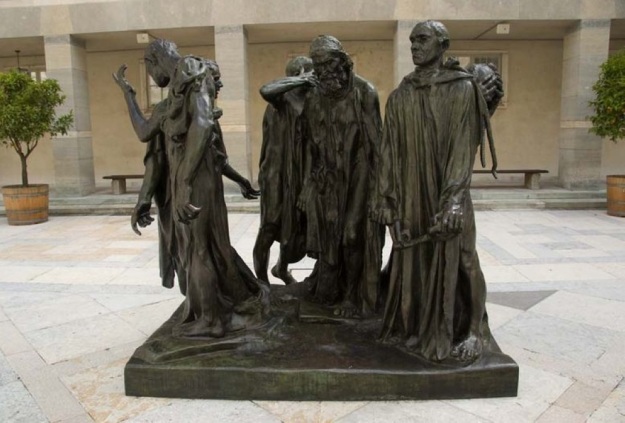 This casting of the Burghers is in the Kuntsmuseum in Basel, Switzerland. By French law, only 12 castings exist. We have one in New York City at the Metropolitan Museum of Art.

Rodin produced many pieces focusing upon the pianist’s hand. As revealing as the face, on their own, they can sometimes symbolize a form of human activity, such as this Hand of a Pianist which seems to run over an imaginary keyboard with nervous energy.

Hand of a Pianist (Hand No. 2)
Dr. Thomas is fortunate enough to have a casting of this sculpture.  If interested, Dr. Thomas enjoys showing patients the beauty of this piece. 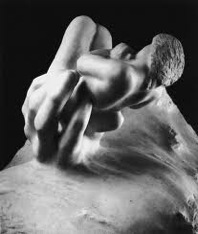 The Cathedral
The Cathedral is composed of two larger-than-life-size casts of-of the same right hand in a prayer-like gesture. The shape and gesture of the hands are reminiscent of the vertical reach of a medieval cathedral, perhaps referring to Rodin’s passion for Gothic architecture. Rodin developed a keen interest in French cathedrals while on a journey to Italy during the winter of 1875.
Taking a train from Brussels, where he was living and working at the time, one of his first stops was in the northeastern French city of Reims. Rodin was struck by Reims’ Cathedral of Notre Dame which was considered to be one of the best examples of Gothic architecture in France. He retained his passion for Gothic architecture throughout his life and even documented it in his 1914 publication The Cathedrals of France (description and photo from the Cantor collection, link to Gallery Six:  Rodin Hands).

Clenched Left Hand with Figure portrays an afflicted hand in a threatening pose; however, Rodin adds a symbolic element that alters the interpretation. The contorted hand towers over a small figure, suggesting a powerful force or dominance. Rodin often combined his sculptural sketches with other figures to create assemblages with highly symbolic content (description and photo from the Cantor Foundation)

The hand of God by Auguste Rodin.  This popular piece represents divine creation expressed in terms of the sculptor’s art: the rough stone is both primeval matter and the sculptor’s medium; the smooth, white emerging forms held by the hand are the bodies of the first man and woman, while the great, life-giving hand itself is a symbol of the original Creator, and, perhaps quite literally, of the sculptor as well. It has been established that the origin of the Hand of God was a study for a hand used for two of the personages in The Burghers of Calais (Jacques & Pierre de Wiessant) whose gestures express farewell and despair. This is a particularly interesting example of Rodin’s gift for giving completely different meanings to works composed of common elements.

Study of a Hand by Auguste Rodin: Auguste Rodin (1840-1917) was fascinated by the power of expression of hands. In 1900, the critic Gustave Kahn wrote, “Rodin is the sculptor of hands, raging, tensed, arched, damned hands.” There is no doubt that Rodin attached more importance to this part of the body than any other. Fascinated by the expressive power of isolated hands, he studied them unceasingly, accumulating in his studio numerous studies in clay or plaster, in which the sensitivity of the modeling vies with the verisimilitude of the gesture. Through hands, Rodin expresses the full range of human emotions, from anxiety to suffering, from resignation to despair.

The hand of Jean de Fiennes from Rodin’s Burghers of Calais: This sculpture commemorates Les Bourgeois de Calais, heroes of the Hundred Years’ War between England and France and symbols of French patriotism. It is a collection of six statues, each depicting one of the men who volunteered to sacrifice themselves to save their city. Jean de Fiennes was the youngest of the six burghers and the 5th to volunteer. His statue depicts him with arms outstretched and mouth open. According to the 14th century Chronicles of Jean Froissart, King Edward the III of England had laid siege to Calais, an important French port city on the English Channel. After 11 months, the people of the city were desperately short of food and water. To save the town, six of its leading citizens offered to surrender themselves to King Edward to be executed in exchange for the freedom of their city. Rodin chose to portray the Burghers as they leave the city, believing they are going to die. The statue was unique in that it was not the usual monument to Victory, rather, it was a tribute to heroic self-sacrifice. The Burghers represent the notions of self-sacrifice to the greater good and humane justice. Rodin depicts the Burghers as vulnerable and conflicted, yet heroic in the face of their imminent demise. Each of the six figures, through posture and facial expression, depicts a distinct reaction to their sacrifice: despair, resignation, quiet defiance. Ultimately, King Edward’s pregnant wife, Queen Philippa, persuaded her husband to spare the Burghers believing their deaths would be a bad omen for their unborn child. I consider The Burghers of Calais to be Rodin’s most moving and powerful work. 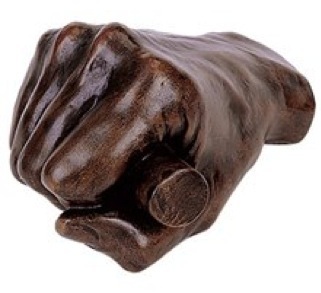 Abraham Lincoln’s right hand by Leonard Volk: In May of 1860, American sculptor Leonard Volk asked Lincoln for a casting of both his hands to be used in later sculptures. Volk pictured Lincoln holding a document in his right hand and requested Lincoln simulate holding something. Lincoln went to his tool shed and returned with a segment of broom handle. The casting of Lincoln’s right hand was made as he held the broom handle. Volk made one of the two existing life masks of Abraham Lincoln. It was made in 1860 while Lincoln was still a State Senator. The second mask was made by Clark Mills in 1865 just 2 months prior to Lincoln’s death. Although only 5 years separate the two masks, the changes in Lincoln’s face provide insight into the profound events that took place during the course of his presidency.

The Creation of Adam by Michelangelo: This is one of the most iconic and most widely recognized images of hands. It is located on the ceiling of the Sistine Chapel in the Vatican painted by Michelangelo between 1508 and 1512. A series of nine panels create the fresco illustrating scenes from the Book of Genesis. The Creation of Adam is the best known and although fourth in the series of nine, it was among the last to be created circa 1511. The hand of God is on the right. The hand of Adam is on the left.

Grande Main Crispée – Mighty Hand by Auguste Rodin Also known as Study of a Clenched Hand. This is another powerful example of Rodin’s ability to express a range of human emotions through his sculpture of a hand.

The hand is a unique area of the human body that is made up of bone, joints, ligaments, tendons, muscles, nerves, skin and blood vessels. These elements must all be in good working order for the hand to functionw well.

The relationship between all these structres is delicate and refined. All injury or disease can affect any or all of these structures and impair the use of the hand.

A qualified hand surgeon is trained to diagnose and treat all problems related to these diffferent structures in the hand, wrist and forearm.

Hand surgeonshave recived specialized additonal training in the treatment of hand problems beyond their board certified specialty training.